DEEEETROIT BASKETBALLLLLL has magically reappeared over the last two weeks as the Detroit Pistons have gone from being an easy win on opponents’ schedules to the scariest team to play in the NBA. Flashback to Christmas and the Pistons were a dismal 5-23, certainly coal in the stocking of the entire organization and fan base. It looked as though the Pistons were to be in a three team race with the pitifully bad Philadelphia 76ers and New York Knicks for the top draft pick in the 2015 NBA Lottery. Just as all looked lost and fan expectations had folded, a shocking move was made by Pistons’ ownership. Forward Josh Smith was released by the team with two years and over twenty million dollars left on his contract. Since the trading deadline of the 2013-2014 season it had been rumored that the Pistons were interested in dealing the veteran player due to his poor shot selection and cancerous effect on the locker room. It just goes to show how far Smith, a once talented borderline All-Star has slipped in the eyes of teams considering that not one trade could be made to ship him off. The accusations on Smith may well have been merited now as the Pistons have jolted back to life with five straight wins against the Pacers, Cavaliers, Magic, Knicks, and Kings each by ten points or more. https://www.google.com/?gws_rd=ssl#q=detroit+pistons+game+scores

Team basketball has reigned supreme as now starting forward Greg Monroe, point guard Brandon Jennings, and recently medically cleared guard Jodie Meeks have given the Pistons reliable scoring as well as defense. A real barometer of where the white hot Pistons stand will come now as they play the Spurs, Mavericks, Hawks, Nets, and Raptors on a five game swing. If they can escape this stretch with a winning record, it wouldn’t be out of question to see a possible playoff run by the Pistons as they are now sit just five games behind the Miami Heat in the eighth seed. http://www.nba.com/standings/team_record_comparison/conferenceNew_Std_Cnf.html

Hopefully new coach Stan van Gundy can work his magic and get the Pistons back to playoff glory in the second half of the season. 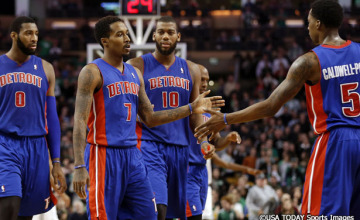